For years, the Council of Three Rivers American Indian Center has hosted a powwow in the greater Pittsburgh area, celebrating their culture and inspiring the young and younger generation. Krisa Spangler, who is chief judge at the powwow, says it started as a small gathering of local people. But about 10 years ago they changed the powwow to a dance competition that drew a bigger crowd of dancers and vendors. Today, approximately 1,500 to 2,000 people attend the powwow each year in addition to the many people participating in the dance competition, musicians and vendors.

Traditionally, a powwow is a sacred social gathering between Native American tribes to form alliances, come together, and share their culture. The first recorded powwows date from the late 1800s. Contemporary powwows are now typically public events for dancing, singing, and recognizing Native American cultures. They often include dance competitions and are held across the country.

Pittsburgh native Michael Simms has been the powwow coordinator for 12 years. He shares that “powwows for us are like a festival. We come together from all the different tribes and share our dances and songs. Simms says he started powwows when he was a month and a half old and continues to do powwows to this day. Simms and Spangler say they travel every year for powwows in the summer and fall. “Yeah, we flew in and went to a powwow,” Simms says of a powwow they went to in Florida.

This year, the COTRAIC powwow will take place from Saturday, September 24 through Sunday, September 25 at Hartwood Elementary/Dorseyville Middle School. At the powwow, you will experience the dancing competition as well as the food vendors and the market. Spangler says they get local suppliers, but they also reach into Canada. They sell handicrafts, clothing and jewelry as well as food stalls. Spangler says people always look forward to food vendors offering traditional Native American dishes like buffalo burgers, fried bread and chili.

At the COTRAIC powwow, there will be a competition for all ages in different dance categories from 55+ to under six. “I love seeing our young people get out and participate in their culture,” Spangler says. “Growing up with this culture, I think it’s really important to congratulate our young people who want to carry on the tradition. Simms also said he enjoys watching children play and seeing what they learn from older generations each year.

Simms says east of the Mississippi, the COTRAIC powwow is one of the last held of the year, which means a number of different people and tribes come to visit and contest. “It’s nice to see our powwow prosper. We built this powwow where dancers and tribes come from all over to visit. Simms says they even brought in dancers from Ontario, Canada. Spangler says, “I love watching dance competitions. It’s unique and even if you don’t know what you’re looking for, you can appreciate the badges.” She says the badges, the outfits worn by the dancers, are all individualized for that specific person and what they like.

In addition to the powwow, the Council of Three Rivers American Indian Center serves those in the greater Pittsburgh metropolitan area and hopes to promote the socio-economic development of the Native American community and others who are experiencing types of economic hardship. similar. Founded in 1969, they host many different programs, the biggest being their Head Start and Early Head Start programs. These programs help low-income children through classrooms, education centers, and their local daycare partners. Krisa Spangler says she has recently worked with their Speakers Bureau, as well as local universities like the University of Pittsburgh and Carnegie Mellon University, to speak about Native American health and teach recognition of Indigenous peoples. 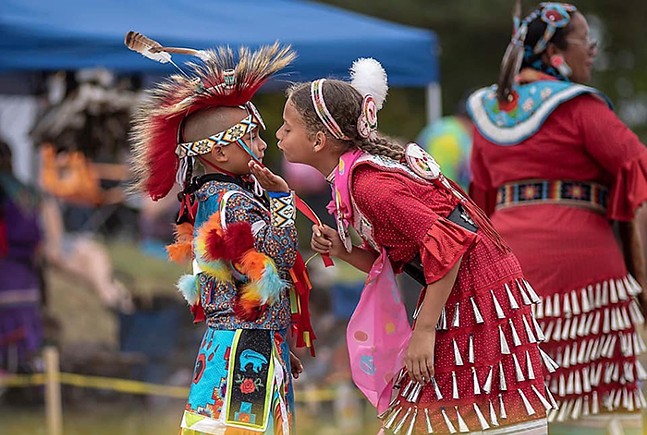 Spangler and Simms shared some tips with Pittsburgh City Paper for new visitors to the powwow. Spangler says, “Just come and have fun.” There will be an emcee who will lead the powwow and let the audience know what is going on or who can attend. She says it’s definitely a family event and don’t be afraid to ask questions and strike up a conversation with the vendors, dancers, singers and other attendees.

Simms suggests that if you go out, try to stay as long as you can because there are so many different things going on throughout the day. “We start with inter-tribal dances.” It is a dance in which everyone is invited to participate. After that, stick around to watch the children’s contest in the afternoon and the adult contest in the evening. And more competitions are held on Sundays although they end earlier in the day.

“It’s a great experience to experience the cutting edge of another culture,” says Spangler, “through dance, food, and music.”