MILFORD, CONN. – On October 27, Shannon’s Auctioneers held its Artwork Auction, featuring nearly 180 paintings, sculptures and multimedia artworks. The majority of them were created by American artists, and all represented in the best lots shared this nationality, with works ranging from the 19th to the 20th centuries. The sale of 179 lots had a buy rate of 84%, totaling $3.75 million.

All but one of the top-selling paintings were created by a male artist, and it was an untitled canvas by Lynne Mapp Drexler that took pride of place as the top-selling painting. Drexler was a student of Robert Motherwell and Hans Hofmann, and she became involved in the Abstract Expressionist movement in New York City in the 1950s. Using bold colors to influence her composition, Drexler’s landscape is composed of shapes in mosaic shape that create the image of a thicket against a blue sky. Many of her paintings created after 1962 are inspired by the landscape of Monhegan Island, Maine, where she and her husband moved after their time in New York, and her affinity with nature and music became deeply intertwined. at his work. Estimated at just $50/75,000, online and phone auctions multiplied the price to $450,500.

Many of the best lots were landscapes, two showing the variations of the Pennsylvania countryside and its seasons. The first was by Daniel Garber, a prominent member of the group of landscape painters who lived and worked in Bucks County, Pennsylvania, and became known as the New Hope School of American Impressionists. The school adopted the French Impressionist approach to plein air painting and capturing the changing effects of natural light while developing its own distinct idiom within the landscape of Bucks County. His 1940 oil on canvas painting “Elm Bough” showed the waning summer light of a river scene and sold within estimate, to a telephone bidder for $262,500. In third place was another New Hope artist from Buck County, Edward Redfield’s “Drifted Road” which also reached its estimate at $237,500.

Scott Kahn’s “The Woods” differed from its peers in color and time of day, showing the gemstone tones of night with blue and red trees under a starry sky. The only living artist in the best lots, Kahn draws on his imagination and memories to create surreal landscapes from his own experiences. According to the catalog, he regards his work as a “visual diary of the world around him”. His work has grown in popularity and price over the past few years and this painting was no exception, purchased for $212,500.

Born in England, Thomas Moran is still considered an American artist because of his many paintings and commissions of what would become national parks, such as Yellowstone and the Grand Canyon, and was even commemorated as the “dean of landscape painters”. Americans”. Moran also traveled extensively abroad in Europe and produced this scene of Venice in 1903, having visited the city in 1886, 1890 and 1911. It sold within estimate for $162,500. The only other landscape in the top lots that was specifically not American was by Robert Vonnoh, a scene of the Grez River in the countryside of northern France that bid $68,750.

Two other landscapes sold just behind Vonnoh’s price. After emigrating from Scotland as a child, William Hart began his artistic career as a journeyman decorative and portrait painter, later concentrating on landscapes and finding success in his thirties. The first to sell, “Sun Setting Over Mountain Stream” more than doubled its high estimate, grossing $62,500 and was one of at least six autumn scenes painted by the artist, most likely inspired by landscapes in the northeast New Hampshire. Selling at its high estimate of $60,000 was a seascape by William Trost Richards, showing a less tranquil New England scene of dark clouds and crashing waves off the “coast of Maine”.

Thomas Hart Benton’s study for “Over The Mountains,” now at the Nelson-Atkins Museum of Art, along with ten of the 18 completed panels of the unfinished American historical epic, also sold above their high estimate of $81,250. The project, which was originally to have 50 panels, marked a turning point in Benton’s career. Tired of formalism and abstraction at this time, he began to define his own style which would eventually become a force in American regionalism and American modern art more broadly. 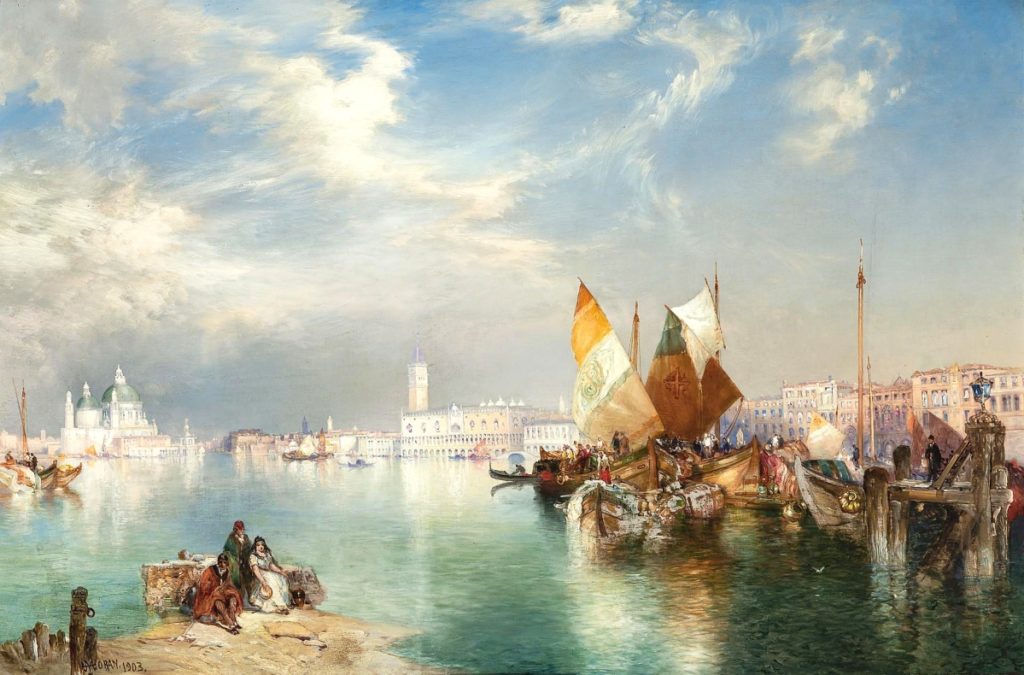 Portraiture was another important genre among the top lots, and those that fetched higher prices were various representational examples. The best-selling and perhaps the most striking of these was that of Walt Kuhn (1877-1949), depicting a woman in a showgirl dress. Kuhn helped organize the Independent Artists’ Exhibition in 1910 and was a founding member of the Association of American Painters and Sculptors (AAPS), which later organized the Armory Show of 1913. Following this event, Kuhn began to develop his own artistic style and focused on circus and vaudeville performers as subjects. Instead of presenting his showgirl with all the tricks of his trade, Kuhn paints this standing, slightly slumped young woman with a direct, restrained gaze against an austere, empty background. Simply titled “Girl in Green”, the portrait sold within estimate for $106,250.

The work of Kuhn’s colleague Robert Henri was next in the top lists; one of six studies by Faith Atkins (later Witter and Breeden), who was five years old when she posed for two portraits in 1928. Henri is known for his portraits of playful children; however, this study is indicative of the more formal mode of painting he adopted while traveling and completing commissions in Ireland. In this series, Henri emphasized color and form, and here his deliberately limited tonal range is emphasized by his splashes of color. The effect is nevertheless reminiscent of a well-behaved but still cheeky child and was bid at $100,000.

American impressionist William Merritt Chase also made an appearance with “Man Holding A Cigar”, an undated portrait of an unidentified man. Chase was successful early in his career and exhibited four portraits at the Society of American Artists in 1878; he also worked as a teacher at the Art Students League of New York and chaired a major gallery in the Tenth Street Studio Building. Either a friend of the artist, or a New York socialite, or both, this sitter’s formal attire showcases Chase’s technical mastery of brave brushstrokes and the immediate presence that has drawn patrons in with the direct gaze. from subject. Sold above its high estimate, the portrait fetched $52,500.

Prices shown with buyer’s premium as reported by the auction house. Shannon’s will conduct an online-only sale in January. For information, 201-877-1711 or www.shannons.com.